Does anyone know what popfilter/pop killer is being used at WDR2 and 1LIVE? It seems to have some kind of ring mount, attached under the plug input of the microphone, extending the filter. I tried to look online, but couldn’t find it.

I’m asking because I have the same microphone and this seems more convenient than a goose neck .

Regards from the Netherlands,

Have a look here: https://hai-audio.com/
They look very similar.

Thanks! Very helpful links . I have asked WDR 2 and they told me they made this construction in house. So I will do the same - make such a construction myself.

Riccardo was faster... indeed, it‘s an in-house construction to mount any standard popscreen without using the gooseneck.
Mostly due to the TV activities (WDR provides about 70% of content for the German public „first channel“ Das Erste) there are on-site facilities to construct furniture (mostly TV sets) and provide these kind of „fine mechanical problem solvers“.

BTW, almost everything of the actual studio furniture had been build in-house, these „shark-fin-shaped“ tables are one speciality: 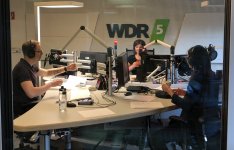 (at WDR 5, picture taken from the Internet)

Same mounting of standard (K&M) popscreens in front of TLM 102.

The mentioned Pauly popscreen is of cause without any doubt state of the art - and probably a bit over the top for most radio applications.
I remember that they were used at WDR 3 in the mid 2000s - mounted with a kind of rubber band to the body of the U87s used.
The state today I would need to research... I guess it‘s still the same but it‘s been a while that I’ve been to the headquarters

Thanks everyone for helping out. My father works at a stainless steel shop, so he took a look at the WDR2-pictures and came up with a ring for me. We attached it to the screw that holds the microphone in place. Now we only need to give it a fancy black color and we’re done. Very cool, right?